As always when Apple’s flagship product (or anything Apple releases for that matter) hits a bump in the road, you can read about it all over the internet and even in the main-stream international press.

This year the release of iOS5 and iPhone 4S was marked by an inexplicable battery drain issue. Initial reports quickly pointed to the location based Time Zone setting as a possible culprit, or faulty contact-syncing, or Ping, … . It’s clear that such issues are hard to debug.

After about a week Apple put the word out that a fix for a number of iOS5 bugs, that affect battery life, would be coming in a few weeks.

But anyway. While trying out Reading List, I came across an issue with Bookmark syncing in iCloud, that can have a severe impact on battery life as well. Even though I have a fairly modest collection of bookmarks (less than 200 urls), switching on Bookmark syncing on my MacBook Pro resulted in a lengthy syncing process that took about 20 minutes and a considerable amount of cpu cycles.

Switching on Bookmarks syncing on the iPhone 4, however, was a lot worse. I ran a little unscientifical experiment where I noted the time and battery level percentage before switching on Bookmarks syncing. Then I waited for the battery percentage to drop 10% before I noted the time again. While I was waiting I turned off the display and only checked in from time to time to see how much of the battery had gone. I ran this experiment after a full day of use, without any unexplainable battery drain issues. 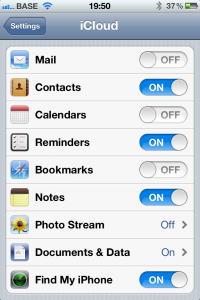 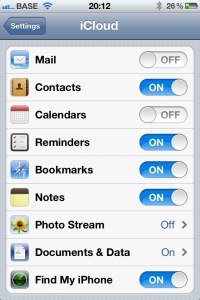 The result was an 11% drop in battery capacity (from 37% to 26%) in 22 minutes. The iPhone also felt hot to the touch at that point. And in case you are wondering, the syncing process wasn’t even finished.

Finally, I was able to fix my syncing problems by following these easy steps:

This fixed the bookmark syncing issue for me. Now I can add or remove bookmarks and reading list entries on any device, and have it sync to my other devices in a matter of seconds. Let’s hope this is one of the bugs that Apple was referring to in their statement.