Brooke Crothers from CNET has learned that a 2560 x 1600 pixel density display is in production for Apple. The display is believed to be targeted at the 13.3 inch MacBook Pro, not the MacBook Air.

I’ve had a 13.3” form factor MacBook for the last six years. I carry it with me almost every day on my long commute that spans two bike rides and a train ride in between. Portability is pretty high on my list of requirements, to say the least. However, that laptop is also my main machine. I use it for work and, to a lesser extend, pleasure1. So it needs to be powerful enough for some software development (Java, Python, Eclipse), scientific writing (Sublime, Latex) and minor graphics work (Omnigraffle, Pixelmator).

The 13.3” MacBook Air has been in my crosshairs for some time now as a replacement for my current 2009 MacBook Pro. But there is something about that super-thin tapered design that has me worried. We already know it sacrifices performance2 because of heat and battery concerns. And I can’t help but feel that the thin design feels less sturdy when being handled and carried around in a bag —although probably without warrant.

What I definitely do like about the Air is the slight increase in resolution and density of the display (1440 x 960, up from 1280 x 800) and its use of SSD storage by default. That’s why I think the rumored 13” retina MacBook Pro —if it is anything like the 15’’ retina MacBook Pro— might just be the machine that really suites my needs:

The Air is a great consumer laptop. Let’s hope the 13” rMBP will turn out to be a great portable Pro laptop.

Ethernet port, you will be missed.

Remarkable piece of editing in this article by Reuters. It’s so good it’s almost subliminal. I highlighted with red to make it easier for you. I guess it explains the 2:1 editor–writer ratio for a 300 word piece. </sarcasm> 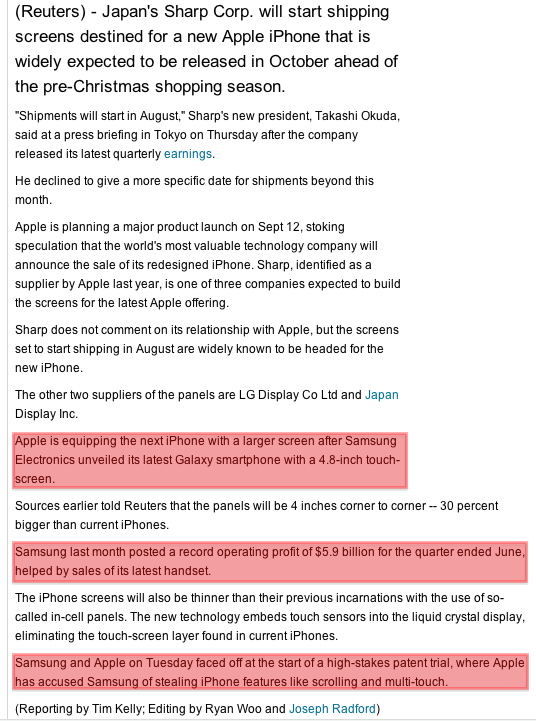 If you want to imply that Apple is copying Samsung in the “bigger is better” display race, then just come out and say it.